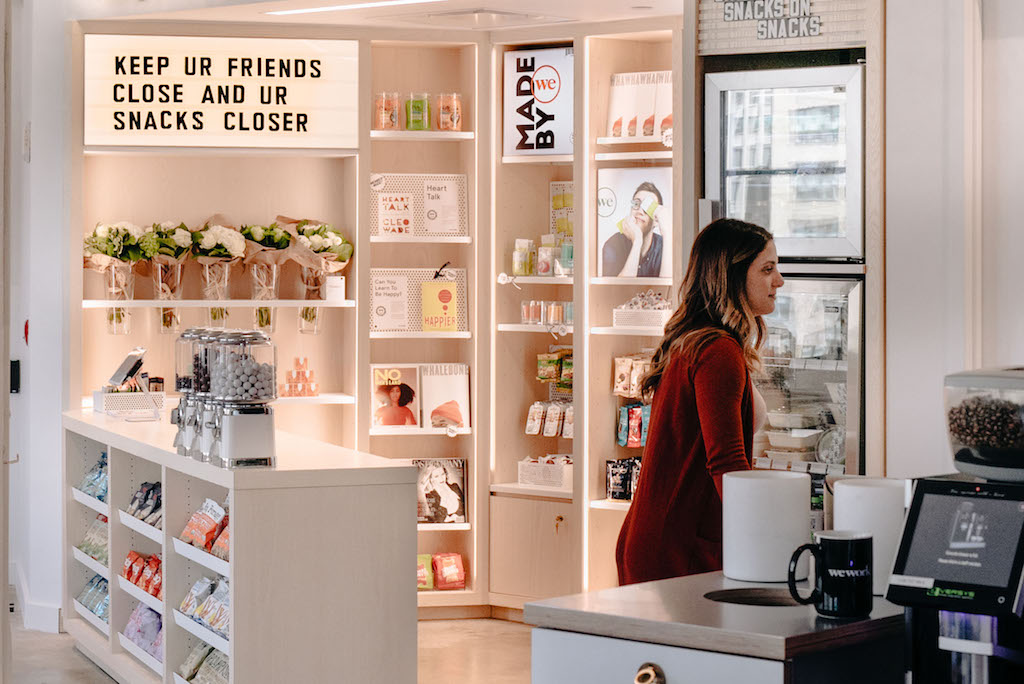 WeWork recently launched a new business concept, dubbed WeMRKT, at the co-working giant’s 205 Hudson location in New York City. WeMRKT is a small shop that sells products created by WeWork members, and while there’s currently only one location, WeWork said it plans to expand the concept nationally.

WeWork’s decision to step into retail comes at a turning point in the market. From Toys R Us to Nine West, retailers across the country are filing for bankruptcy at record levels as consumer shopping habits continue to shift.

But not all retailers are struggling. Discount shops are booming while retailers who effectively employ creative, omnichannel strategies are finding success.

WeWork’s new concept is another step in retail’s evolution. From the fusing of the office and retail sectors to new opportunities for brick-and-mortar, here’s what WeWork’s foray into retail says about the current state of the market.

At the moment, WeMRKT is only open to WeWork members. The store offers a small assortment of products, many of which are created by WeWork members, who compete against each other to get a space in the store.

Those products include Icelandic yogurt, cold-brew coffee, portable chargers and vegan snacks. In April, WeWork chose 10 member companies to sell at WeMRKT based on a combination of eye-catching packaging and strong business plans, however the company said they will hold new competitions each quarter to involve more sellers. Winning companies will also have the option to work with SnackNation to distribute their products to a wider audience.

“Our goal is to connect today’s top emerging brands with key consumers at their most engaged moments,” said SnackNation CEO Sean Kelly. “I cannot think of a better way to fulfill this mission than by partnering with WeWork and all of the entrepreneurs they serve at their inspiring co-working spaces.”

The concept fuses office and retail

WeWork maintains 260 offices around the world, so as WeMRKT expands sellers will have access to an enormous built-in customer base. By fusing office and retail, WeWork is creatively leveraging its businesses to grow a retail presence while giving retail startups a good reason to become WeWork members. After all, what retail startup wouldn’t want to tap into WeWork’s global network of customers?

Indeed, for many of the winning companies the opportunity to sell their products in a brick-and-mortar store could be a game changer. Most of the winners are currently direct-to-consumer online companies, but now they can expand their reach through physical shops without bearing the costs of renting their own retail space.

“WeWork will help our members to reach new audiences and customers,” said WeWork Chief Brand Officer Julie Rice in a press release. “As brick-and-mortar retail is disappearing, our WeMRKT will offer our members an entirely unique channel of distribution.”

Although the products for sale at WeMRKT are currently only available to WeWork members (and SnackNation customers as a perk), it’s possible the concept could grow to include general shoppers. Whether or not that happens, WeWork’s retail concept represents a creative fusion of office and retail that fits in with the retail sector’s ongoing evolution.

Despite the hype, brick-and-mortar retail is far from dead. After all, if it was dying, why would Amazon aggressively enter the sector with its Whole Foods acquisition?

But there is no question that what it takes to succeed in retail is changing. While several traditional retailers like Toys R Us are failing, the Wall Street Journal reported that arts and crafts retailers and off-price chains like T.J. Maxx are occupying much of the space left behind.

While it’s likely we’ll continue to see retail closings, especially considering a 2017 Cowen study that found American retail markets contain more than four times the per capita shopping space than exists in the UK or France, that doesn’t mean retail is doomed. Instead, traditional brick-and-mortar retailers are finding ways to balance their online offerings with physical stores while working to give shoppers a reason to show up.

As retailers try to get the balance right, it’s becoming clear that creative strategies are part of the answer. Pop-up stores are an increasingly popular way to generate revenue and brand awareness without committing to an expensive lease. Even traditional retailers are rethinking the purpose of brick-and-mortar — Nordstrom is expanding its Local concept and planning to open two more inventory-free, experiential locations this fall.

WeMRKT represents another step in retail’s evolution. The concept overlaps the office and retail sectors and gives startups another reason to choose WeWork over a competitor, let alone a traditional office building. Rather than being near death, WeWork’s new concept shows that the retail sector is bursting with potential to evolve in exciting and unexpected ways.