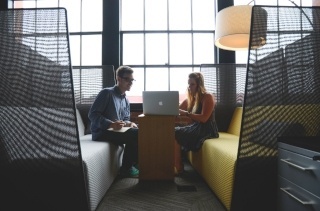 For many professionals, the lines between our work and non-work lives are growing increasingly blurry. And many even tend to like it that way.

With the advent of smartphones and wireless internet, most knowledge workers no longer need to be at work to get work done. According to Gallup, 43% of workers spend at least some of their time working remote, up from 39% in 2012. As a result, the role of the office is evolving.

Rather than consider our offices as a place to punch in and out before heading home to relax, we now seek out offices that function as community hubs that allow its members to be productive both in work and in life.

This shift will have obvious effects on the commercial office landscape–but less obvious ones on the retail and hospitality spaces. Here’s what you can expect.

Because work can now be done anywhere with a WiFi connection and good coffee, most American workers come into the office to interact and collaborate with fellow employees. This need for interaction, in part, gave rise to the infamous open office floor plan. For years now, the debate over the merits of the open office floor plan has raged on. Despite the open floorplan now being the dominant model, most will agree that open offices can hinder productivity.

Still, with the shift we’re seeing toward work-life symbiosis rather than separation, open offices won’t go away. Instead, according to the Harvard Business Review, they will start to function more like ecosystems of spaces. The article argues that the best offices are the ones that allow people to choose where and how they get work done, based on need, not on rank. Offices will shift toward being a blend of open and closed spaces to allow for maximum collaboration and productivity.

With the coworking trend going strong, traditional retailers are eager to get in on the action in order to stay relevant. Staples recently announced a partnership with WorkBar that will turn some of its stores into coworking hubs as a way of making up for the lost foot traffic brought on by online shopping.

Malls are also scrambling to become hubs of work-life symbiosis. To do so, they will need to shake off their retail reputations.

In a recent study done by JLL, 40.7% of redeveloping malls have added multifamily unites and 29.5% have chosen to add in office spaces. The hope with all of this is to bring new life to the retail portion of malls by placing additional emphasis on non-retail amenities, through a sort of halo effect.

Coworking will intersect with hospitality

The shift toward work-life symbiosis is having an impact on the hospitality sector as well.

Americans have traditionally been pretty terrible at taking vacations. In 2016, 54% of Americans were left with unused time off by the end of the year. And even when we do take vacations, most of us are still plugged in and willing to check in with work occasionally. According to Project Time Off, 82% of Gen-Xers said they actually feel more comfortable going on vacation if they know they can stay tuned into work.

The hospitality industry is taking note, and resorts designed specifically for working vacations—or “workations,” as they have been dubbed—are cropping up all over the world. One such company is Outsite, which blends hotels and coworking spaces to provide comfortable and connected options for remote workers to be productive and enjoy the perks of vacation. Outsite has locations in Costa Rica, Bali, California and a handful of other enticing locales.

American workers will continue to blend work and life in 2018, which will, in turn, impact the spaces in which we work, live, and play.