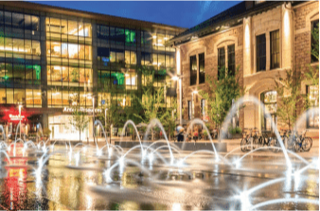 One word describes the state of today’s commercial real estate industry better than any other — change.

That’s the underlying message of the Urban Land Institute’s latest Emerging Trends in Real Estate report. A joint project of ULI and PwC, the report considers the feedback of more than 750 real estate professionals and offers a high-level overview of the most important trends shaping the industry.

Tenant demands are shifting, the economic outlook is uncertain, and technology is impacting everything from industrial logistics to end user experiences. At the same time, demographics are evolving to move the emphasis from downtown markets towards 18-hour cities and amenities are defining the new generation of commercial space.

From locating stability in transformational markets to understanding the role of technology, here are four of the most significant takeaways from the ULI report.

The industrial sector shines through as one of the industry’s lone rocks of stability. For the sixth year in a row, the Emerging Trends report ranked industrial as the top property sector. The reason has everything to do with e-commerce — logistics real estate grows in harmony with e-commerce, and the experts surveyed said there is little reason to suspect e-commerce will run out of room to grow anytime soon.

The report highlighted a growing need for industrial properties to accommodate the demand for a deeper distribution network, with last-mile urban properties becoming increasingly important. Warehouse vacancy rates are at historic lows and surveys show consumer appetite for faster deliveries is accelerating. In 2017, only 35% of shoppers said delivery times of three to four days constitutes “fast shipping,” down from 42% the year before.

Barring a pickup in trade wars, the report said CRE professionals and investors have no reason to expect a major slowdown in industrial markets this year.

Despite the popular (and incorrect) belief that millennials would do anything to trade a suburban house for a downtown apartment, U.S. Census Bureau data shows that over 2.6 million people moved from big cities to the suburbs between 2016 and 2017. As the oldest millennials reach their late 30s, America’s largest generation appears to be following the same home buying trend that defined their parents.

Looking at ULI’s top markets, nine of the top ten and 17 of the top 20 are non-gateway markets. Many of those are 18-hour cities, such as: Dallas, Raleigh, Orlando, Nashville, Austin and Denver.

It’s true that millennials are taking their time flocking to 18-hour cities, but much of that can be attributed to the housing affordability crisis. According to the Department of Housing and Urban Development, half of all renters pay more than 30 percent of their income on housing, while 12 million Americans spend more than 50 percent of their earnings on housing.

This has made it difficult for many millennials to buy in the suburbs, yet it hasn’t done anything to hurt the natural draws of 18-hour cities: more space, good schools, and greater affordability than downtown markets. The latest data shows millennials are moving to take advantage of those benefits, and brokers and investors can position themselves to facilitate this trend.

One of the newest trends is reinventing lobby space and common areas to bring different sectors together as a sort of experiential amenity. Fitting the live/work/play mantra, the report gave the example of using an apartment lobby as retail space and the second floor as coworking space, with apartments on the upper levels.

The realm of amenities is evolving to include services, such as cooking classes and babysitting, in addition to more traditional offerings like gyms. Investors said this trend is likely to set the phenomena of amenity creep into overdrive as expectations rise across the board. Fueling this overdrive, the report highlighted findings from behavioral economists that suggest people are more inclined to respond powerfully to a loss than they are to a gain, meaning we can expect many old amenities to stay in place despite an influx of new offerings.

Nobody wants to be the first to cut amenities, and veteran investors told ULI this dynamic positions amenities as a key tool for landlords to differentiate themselves from the competition.

4. Technology will shape the industry’s future

The question is: Will technology democratize the industry by unlocking capacity and boost productivity across the board, or will it push consolidation by favoring those with the capital to embrace it?

Unsurprisingly, ULI does not have a definitive answer. The arena of CRE technology is so vast that it’s likely we can expect a bit of both, depending on the sector and the technology. Yet the  industry certainly knows how important the right technology is; ULI said real estate tech investment is projected to top $5.2 billion in 2018, a massive increase from the $1.3 billion invested in 2014.

Although it’s unclear exactly how technology will shape the industry, there is no question that technology will be a fundamental part of the industry’s future. So whether you’re a landlord, tenant, broker or investor, start researching and investing in the technologies that will propel your business forward.