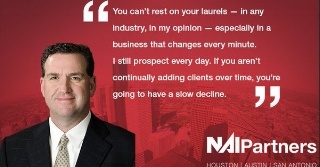 For the first episode of his new podcast, Common Area, Apto Founder and Chief Strategist Tanner McGraw interviewed Jon Silberman of NAI Partners. Jon has more than 20 years of  experience in tenant representation and corporate services and an uncommon commitment to discipline and consistency, traits to which he contributes much of his success.

Despite his decades of experience, Jon sticks to the basics when it comes to maintaining his pipeline or riding out tough times. As Tanner and Jon discuss, to be successful in CRE, there are no tricks, there is only hard work, consistency, and discipline, all of which can be aided tremendously by an organized CRM system.

Here are some of the principals Jon maintains to this day:

Establish your system for the long term, and never forget follow-up

Jon is a firm believer in the power of establishing an organized, systematic process to support a pipeline for the long haul.

“I’ve always been a CRM guy…You can’t possibly effectively manage a big enough base of prospects without an organized system…You have to put the data in, but then you come in every day and have your list of calls you know you have to make.”

He notes that over time, you start seeing people you haven’t talked to in six months or more. Both Tanner and Jon have experienced lost deals because they simply forgot to follow up. Most brokers won’t admit it, but it happens all the time. And that’s exactly what a good system prevents—you never lose touch of your network, you never lose that deal.

20 calls a day, no matter what

Most young brokers know the importance of establishing a pipeline through consistent phone calling, but how many brokers who have been in the business for 2+ decades still maintain that same level of discipline?

Jon says he still makes at least 20 phone calls every single day. Even though 75-80% of his business is through repeat clients or referrals, he still spends an hour or more each day to prospecting.

“You have to go back to the basics, and do it every day and have the faith that at the end of the day, it’s going to pay off.” He believes that no matter how far you are in your career, you always have to strive to build your business or you’ll be on a decline curve.

Jon says often that it’s these small efforts spread out over months or even years that have yielded the biggest returns. Many brokers see a lease expiration in five years and just dismiss it. But his mentality of consistency means he’ll call that prospect every single month for years. When the time comes, that prospect will say “This guys been chasing me for five years, he earned the business!”

In CRE, there are a lot of things you can’t control, maintaining the discipline to pick up the phone every single day is something you can and should control, says Jon. Eventually, it pays off. One example he remembers is a 50,000 sq. ft. office lease with a $700,000 commission. “It was from a phone call I made three years ago…from that one activity one day when I could have been doing something else.”

On top of his 20 calls per day, Jon employs a simple trick to ensure each day is manageable and productive. It’s especially helpful on the days when the work seems too overwhelming.

No matter how busy he might be, he takes a few minutes at the beginning of each day to jot down the top 5 things he needs to get done by the end of the day by asking himself: “If all else fails, what do I absolutely need to do?”

This simple practice helps Jon focus on only the most important activities, makes a daunting day feel manageable, and reminds him at the end of the day of how hard he worked.

Another important trait which Jon has picked up over the years is the ability to overcome “no’s” without looking at them as failures.

“You might lose out once but don’t give up, come back and say i’ll get you next time,” says Jon.

Both Tanner and Jon have had numerous deals fall through, only to find that simply by remaining consistent in their outreach efforts, they were able to reap a future reward.

Again, in order to be successful with this approach, Jon insists brokers must have a technology based system in place.

“Without a system, I would forget about those deals, but with Apto I see I need to call them or take them out to lunch etc. The most successful brokers always have a process and this is true in business in general.”

Whether you’re just starting out and establishing your pipeline, or you’re a seasoned pro in the CRE industry (or any industry for that matter) Jon’s wise words on discipline, consistency and hard work will serve you well.

There’s a lot more to the interview, too, so listen or download today to hear the rest. You can also take a peek at the system Jon relies on for his success.