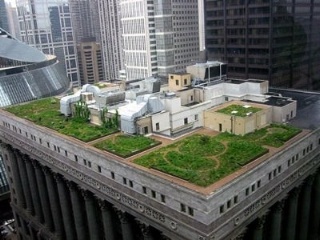 In November 2017, the city of Denver made history when voters moved to require new and existing buildings over 25,000 square feet to allot a portion of their roofs to vegetation, or green roofs.

Not everyone in the city was pleased with the new initiative, however. Many building owners feel the rule is too strict and will make building in the city too costly. The Green Roof Task Force Committee, comprised of various stakeholders, is now working to recommend changes to the new ordinance to city council.

Alyse Opatowski is an accredited green roof professional and founder of Sow Green, a company that helps Denver building owners and developers navigate the new green roof initiative while maximizing returns. As an environmentalist with a background in CRE, she sits at the middle of the green roof construction process by managing projects and connecting developers with the best landscape architects, structural engineers, modular tray companies and roofing contractors in Denver.

We sat down with Alyse to learn more about the green roof initiative and how this trend could reshape building practices across the U.S.

Let’s start with the obvious question: what is a green roof?

A green roof is simply a green space over a manmade structure. They can even be located on the ground level if placed over a parking garage, for example. Green roofs add layers of protection and insulation to buildings and have environmental and public benefits.

Why is Denver’s green roof initiative so controversial?

Developers were initially upset by the initiative because the up-front cost of green roofs can be 2-3 times higher. Building is already expensive in Denver because of rising land prices, low unemployment leading to higher labor costs and numerous restrictions already in place.

I think the opposition to the initiative was due largely to lack of understanding of green roofs. They are very popular in Europe but the concept is still relatively new to the U.S. Luckily, when done properly, green roofs can benefit the environment, city residents and developers immensely.

The green roof initiative passed despite the nearly $250,000 opponents spent in attempts to defeat it—why do you think voters were so determined?

I think what really convinced voters was the message that green roofs can solve the urban heat island effect, a phenomenon where cities are typically hotter than surrounding rural areas. There is a cooling effect provided by plants that can lower building temperatures and surrounding areas, impacting the entire city.

Denver is the third hottest urban heat island in the U.S. and only 50% of Denver residents have air conditioning, so it’s easy to see why organizers had such an easy time enlisting the support of residents.

What sorts of benefits and downsides can building owners expect to see from green roofs?

In terms of benefits, developers can expect to see an increase in building valuation of up to 11% and added amenity space. Depending on what type of roof they install, they can also see better energy efficiency and lower energy costs. There could be a payback in as little as 6 years.

The main downside is that green roofs have a higher up-front cost. However, there are alternative financing options like C-PACE.

In your experience working with developers, what are the biggest misconceptions held surrounding green roof projects?

Many developers worry about what adding a green roof will do to their building. For example, there are concerns about irrigation and whether adding more water to a building located in a drought area like Denver will cause problems. Denver Water has actually said the impacts on water treatment facilities are neutral because plants can hold water, preventing treatment facilities from being overwhelmed during flood situations. Plants also filter water and improve its quality so if anything, the effects on water quality are beneficial. Denver anticipates many green roofs to use sedems, which are drought tolerant and use only small amounts of water.

Another concern is that adding green roofs will damage the infrastructure of a building by causing leaks and other issues. But again, green roofs actually have the opposite effect by protecting roof membranes and allowing them to last 2-3 times longer.

How is your company, Sow Green, involved? Navigating the green roof ordinance and building process is very complex, so we founded Sow Green to help developers determine what their best options are to be compliant while maximizing their returns. We are a consultancy company that walks developers through the entire process, starting by showing them their net present value, payback period and ROI. From there, whatever decision they make, we take care of the process from design all the way through to maintenance.

Our goal is to make sure you have the best team and materials for your roof or whatever space you decide to modify.

Do tenants care about green roofs? Yes! Buildings that have green infrastructure are filling more quickly and projects with green roofs have decreased tenant turnover rates.

The initiative passed by over 9% and this came from voters and tenants. These are people that want the spaces they live and work in to be covered by green roofs.

Denver is known for being an eco-friendly city, are these sorts of initiatives taking place in other cities in North America?

Cities around the U.S. and Canada have been moving to encourage green roofs both directly and indirectly for some time. For example, Chicago, Portland, D.C., and Seattle have incentives around green roofs like grants, and fast-track permitting procedures. As of right now, the only other cities that have similar mandates to Denver are San Francisco and Toronto. Both of these cities only require new buildings to include green roofs, where Denver is the first and only city to include existing buildings in the mandate.

What’s next for the green roof initiative in Denver?

The Green Roof Task Force Committee will present their recommendation to city council in the next few weeks. Then city council has the right to make changes from the end of June through August. You can submit public comments until June 3rd to katrina.managan@denvergov.org.

What’s likely to happen is that instead of forcing builders to decide between green roofs and  solar, or a combination of both, they will be given more flexible options to choose from. While their upfront costs may be lower, they may not receive the same private and public benefits as a green roof or solar panels.

More options will lead to more complexity, meaning builders will have to evaluate options like cool roofs, green spaces on the ground, offsite solar and energy efficiency programs. These are the sorts of decisions Sow Green will help building owners navigate.