There are plenty of cringeworthy stories out there about brokers who lost a deal, maybe even because of that one little detail that slipped through the cracks. It’s never fun to lose, and it’s why brokers need better tools to manage it all. Yes, sometimes things just fall through, but there are definitely ways to get better at tracking, managing, and executing deals.

Apto Deals is our latest feature set designed to help brokers track, manage, and execute deals from start to finish with a simple interface and intuitive workflow that drives everything forward.

Apto customers can learn more about Deals by watching a previously recorded webinar or visiting this help article.

The gist of Apto Deals

In one dashboard, you can see where every deal is at every stage, from prospect to negotiations to close. Prioritize at a glance, and select a deal to see your tasks and marketing activities so you can get to work right away. Move from there directly to call lists and turn prospects into offers, then start over with a ready-made playbook for the tasks you need to get the next deal done. 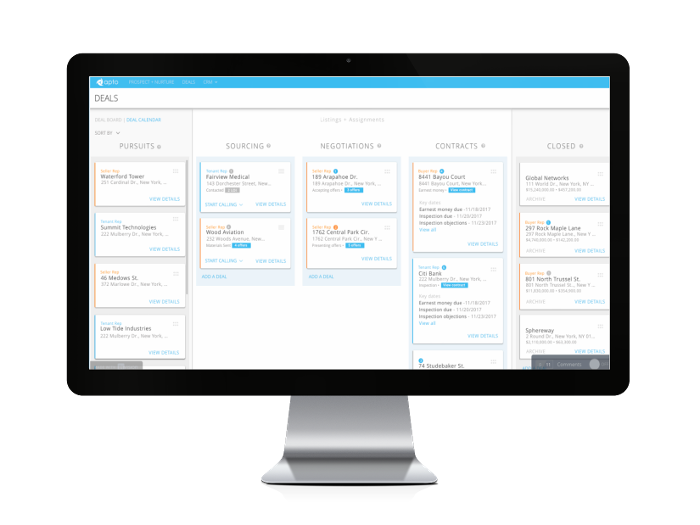 It’s all in one place so nothing slips through the cracks and you can work your deals more efficiently.

A closer look at how it works

If you’re curious about the specific ways it works, here are some of the things we’re excited about.

The main interface of Apto Deals features a KANBAN-style board (if you’re familiar with Trello, it’s a similar idea!). It’s designed to give you perfect visibility into all your deals so you know what to prioritize to help drive momentum. You can drag and drop your deals through a natural CRE deal flow that includes pursuing new deals, sourcing buyers, tenants and sites, and negotiating offers, and closing a deal out.

You’re probably winning and executing business with a repeatable process that demonstrates your unique value. In other words, you have a task list or task playbook to keep momentum and get the deal done. We built a super simple way for you to create a task playbook that can easily be applied to any deal stage, thereby helping you be much more efficient.

Wouldn’t it be great if you could build a list of buyers who are likely to have interest in your listing based on their acquisition criteria? What about tenants for the available space in your building? We’ve taken our broker favorite call lists and worked them into Apto Deals so that you can focus on the highest probability prospects to help expedite the sourcing process, giving your speed and efficiency as you work towards close.

So getting your most likely listing prospects into an actionable list is one thing, but engaging them with the needed context to convert them is another. Apto Deals introduces an intuitive new deal activity funnel that helps you visually track level of interest and move prospects from contacted to offer and everything in between. When you want to get your client up to speed with how your marketing efforts are going, simply export the list of activities and send it along. Or if you want to really impress them, just show it to them live.

There are a lot of documents to create, view, and exchange when working a deal. While each stage of a deal requires different documentation, those documents remain important from pitch to close and should be retained. Apto Deals provides a single place for important deal documents like rep agreements, brochures, LOIs and Lease Proposals. Better yet, those documents stay attached to your deal as you advance from one stage to another helping to ensure you and your team have all the necessary documentation to understand where you’ve been and what to next.