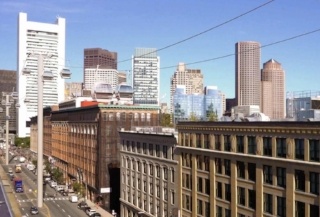 This month, we’ve been following CRE developments across the nation, from a new kind of sports arena in Texas to a sky-high traffic solution in Boston. Here are the stories that made us stop and think this month:

Warehouses are really hot right now—especially the colder variety. According to CBRE, an expected surge in online grocery sales should lead to more demand for cold-storage warehouse space. As grocers begin to accommodate online demand, 35 million square feet of cold-storage space is expected to shift out of retail locations and into warehouses and distribution centers in the next seven years. Demand for climate-controlled warehouse space is in the early stages but expected to grow, which means brokers on the lookout for a new specialty could capitalize on this trend. That’s especially good news if you do business in states like California, Washington, Florida, and Texas, which boast the greatest concentration of cold-storage facilities.

A commute in the sky.

The wait continues for Jetsons-inspired flying cars, but at least Boston residents can entertain the idea of a ski resort-style commute, thanks to an ambitious plan to build an aerial gondola through its Seaport. The 1-mile system proposed by Millennium Partners and Cargo Ventures is being pitched as a way to relieve traffic congestion and withstand those famous Boston winters. It’s a creative solution, but it’s not the first time something like this has been proposed: at least 25 other cities worldwide already have similar transit systems, including London and Hong Kong. The US has two: New York’s Roosevelt Island Tram and Portland, Oregon’s Aerial Tram.

Last year, California was the first state to pass a net-zero building code, and other cities across the nation have made similar commitments. Washington, D.C., for example, is aiming to make all buildings net zero in by 2032. These buildings—both residential and commercial—are considered to be “net zero” if they generate enough of their own energy to cover consumption. Developers are already building for a net-zero future: in 2016, net-zero developments grew by 33% over the previous year, and firms like DPR Construction in San Diego are pioneering cost-effective ways to transform office buildings into net zero success stories.

Not all amenities are created equal.

A study by Newmark Knight Frank uncovered a surprising insight: the more amenities an apartment building has, the lower its selling price. But not all amenities are created equal. Service amenities like pet grooming, valet parking, and a concierge on call actually boost a building’s sales price—perhaps because they don’t take up significant square footage and can charge fees per usage, unlike a pool or fitness center.

Well—maybe not. But there’s a new game in town, and it needs an arena. Competitive video gaming, known as “esports” is projected to become a $1.5B market by 2020—which means it’s moving out of the basement and into a stadium of its own. Esports Venues LLC is putting up $10M to convert an existing convention center into an Esports Stadium in Arlington, Texas, just outside of Dallas. Once complete, the Esports Stadium Arlington will be the largest in the world, with space for about a thousand spectators. “We’re ready for the biggest tournaments in the esports industry to call Arlington home,” Arlington Mayor Jeff Williams said in a statement.