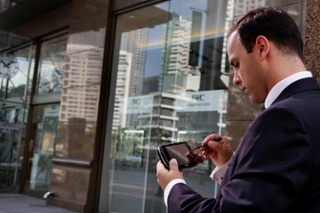 Do you have prospecting goals? Maybe you set aside an hour each morning to call however many people you can, or perhaps you set a goal of 500 calls a week.

The next question is tougher: Do you ever meet those goals? Let’s face it—you’re busy, and prospecting isn’t fun. Not only is it not fun, our brains aren’t really wired to feel motivation for a task where the payoff is so far in the future! Any given call might turn into a deal, but even if all goes perfectly, it could be months until you see a paycheck. More often it’s years.

Now here’s some good news: there’s a different, easier way to approach prospecting. Most brokers probably default to increasing call volume when they want to fill their pipeline. But if you break the numbers down a little differently, you can create a strategy that’s a lot less overwhelming and a lot more effective.

There’s a simple, logical system outlined by Blaine Strickland in his book Thrive: Ten Prescriptions for Exceptional Performance as a Commercial Real Estate Agent. Dubbed the “top-of-mind” prospecting system, it replaces cold call stress with a simple but logical system.

It’s based on the idea that you shouldn’t just try to reach the right people at the right time. The chances of actually connecting on any given call are incredibly low. Instead, you should try to be the first person a prospect thinks of when they think of a trusted real estate advisor. If you can capture that spot in their brain, then you’re set.

Numbers breakdown: How much time it takes—and the income it makes

As Strickland outlines, the numbers speak for themselves. Here’s how it breaks down.

To start the process, identify 125 key prospect in your market. That’s 125 people who are likely to interact with you, and will need a broker for a deal at least once every five years.

Break it down further: there are 13 weeks in a quarter, let’s say you work 12, leaving 60 work days a quarter. If you make a high-quality connection with two of your 125 targets every day, you’ll work through the roster in a quarter. If you repeat this every quarter, you’ll make four significant connections in a year with your target prospects.

A few caveats: a “high-quality” connection is a conversation where you learn something about your prospect and build the relationship. Don’t make the hard sell, you’re just working to establish your expertise.

Every prospecting call is a deposit in your future income. Establishing a system can help frame your day-to-day tasks and keep you motivated. It doesn’t take fancy technology, although if you do want automated reminders for those specific contacts, you can use Apto’s call lists to keep you organized.