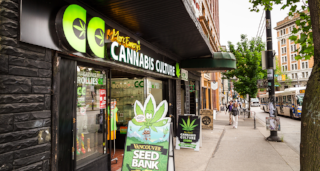 Weed, pot, grass, marijuana or cannabis — no matter what you call it, this plant is shaking up voting booths and real estate markets across the country.

It’s one of the fastest growing niches in the industry, but thanks to legal problems, funding difficulties, and general wide scale uncertainty, it’s no surprise brokers have been a little slow to embrace cannabis real estate.

But for brokers wanting to dance with Mary Jane, the time to be slow is over.

The global cannabis industry is expected to grow over 20% over the next four years. In North America it’s expected to grow even faster. That type of growth is creating opportunities for brokers comfortable with the uncertainty that comes with cannabis real estate.

But before you dive in, it’s important to know the niche’s risks and opportunities. So from understanding cannabis’ legality to recognizing how its unquenchable thirst for real estate could impact your market, here’s everything you need to know about the intersection of cannabis and CRE.

The short answer is, yes and no.

Here’s the long answer. On the state level, nine states and Washington, D.C. have legalized cannabis for recreational use for adults over the age of 21. Those states are: Colorado, Washington, Oregon, Vermont, Maine, Massachusetts, Alaska, California and Nevada.

Another 21 states, with Oklahoma being the most recent, have legalized cannabis for medical use (check out this map to see every state that has legalized pot).

So while 30 states currently allow some form of legalized cannabis, on the federal level marijuana is still classified as a schedule 1 drug. That means it’s just as illegal as heroin or cocaine, and while the Obama administration generally didn’t interfere with states that legalized cannabis, the Trump administration decided to allow federal prosecutors to crack down on the marijuana business in states where it is legal.

From a legal perspective, cannabis is in a sort of no man’s land. While many states have legalized pot in some form, it’s still 100% illegal as far as the federal government is concerned.

But that legal grey zone is doing nothing to put a damper on the cannabis industry’s thirst for real estate.

Cannabis growers need space to grow their pot. That could mean agricultural land or, more commonly, greenhouses. Either way, there is a clear connection between the industry and CRE — every large cannabis grower needs to work with a broker to find and secure their growing sites.

Beyond this simple connection, many of the largest cannabis growers are making additional pushes into real estate.

Because of the legal risks and uncertainties involved with cannabis production, most landlords will only rent C class industrial spaces to growers. These properties almost always require expensive upgrades before they can be used to effectively grow pot, all of which are paid for by the growers. On top of that, landlords typically charge growers 2-3 times more than they would charge other businesses. These costs add up, and with the constant threat of being forced to leave when the lease ends, most large-scale growers are deciding to buy properties rather than rent them.

In an industry facing so much uncertainty, owning your own real estate is one way to minimize risk. That’s certainly the view of Crop Infrastructure Corp., the cannabis company that’s currently building close to 2 million square feet of greenhouse space in Nevada. The company has also amassed an impressive real estate portfolio of growing spaces spread across California and Washington.

In a trend that makes Crop Infrastructure look more like a real estate company than a cannabis producer, the company is also buying land to lease to smaller growers. Considering real estate is the lynchpin in cannabis production, it’s no surprise that cannabis companies are growing their real estate footprint — and that’s creating opportunities for brokers.

An uncertain but exciting future

When it comes to meeting the cannabis industry’s land needs, we haven’t even scratched the surface.

Just after the Canadian Parliament voted to legalize marijuana, JLL reported Canada’s largest marijuana growers will need an additional 8 million square feet of industrial space over the next two years. That type of demand will squeeze industrial markets even tighter, and if full legalization hits the US, we can expect demand for industrial cannabis space to soar.

It’s true that the fate of legalized marijuana in the US is uncertain. But if opinion polls are anything to go by, there’s reason to believe more states will legalize cannabis — the latest Gallup poll shows 64% of Americans think cannabis should be made legal. That’s the highest level of support for legalization in almost 50 years, and a majority of both Republicans and Democrats back legalization.

Of course, polls are not always an accurate predictor of the future. But what about economic performance?

According to a report from Arcview Market Research and BDS Analytics, global spending on legal cannabis is expected to hit $32 billion by 2020. That number represents a 22% growth rate over the next four years. When it comes to North America, legal marijuana sales were up 33% in 2017 to $9.7 billion, showing cannabis businesses are growing faster than anticipated despite ongoing federal prohibition.

For brokers interested in entering the cannabis sector, it’s important to understand the legal reality. Marijuana is legal in 30 states, but on the federal level it’s still illegal in all 50. Historically, federal prohibition hasn’t had a large impact on the growth of cannabis businesses in states where it’s legal, but that could change under the Trump administration.

At the same time, cannabis businesses are moving deeper into real estate for greater security in a business flooded with uncertainty. That push is creating opportunities for brokers. But before you decide to jump in with both feet, it’s important to recognize the cannabis industry’s unstable legal position. While you may end up getting your foot in the door in one of the industry’s fastest growing niches, you may also find yourself suddenly needing to find a new specialization.

The decision depends on how much risk, and reward, you’re willing to wager.