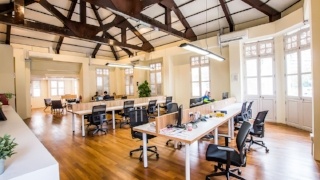 Coworking made its mark as a solution for startups in need of a flexible, affordable place to house their teams while they proved out their idea. Spaces like WeWork, Industrious and Knotel became popular not only for their flexibility, but for the stellar amenities they offered. CEOs could treat their teams like royalty—think high-end coffee, beer on tap, HR perks and free events—without ever signing a long-term lease.

Initially, the idea was that businesses would stay in their coworking space until they matured to the point of being ready to sign that traditional long-term lease and move into their own space. But the recent trend of major corporations moving entire teams into coworking spaces, or simply allowing their employees the choice of working in coworking spaces around the city instead of one central office, has turned that notion on its head.

The number of 1,000+ employee corporations using coworking has more than doubled since 2016, and these companies now contribute 25% of WeWork’s revenue, funding much of its explosive expansion.

Coworking spaces are no longer starter solutions for small startups; they represent a way to infuse entrepreneurship, collaboration, and fun into already established businesses. This trend is picking up steam, so we will explore why it’s happening, who’s involved and what this could mean for the commercial real estate scene in your city.

Which businesses are partnering with coworking spaces?

The types of businesses getting in on this trend appear to be more established corporations trying to either hang onto their entrepreneurial, startup reputation or, revamp their image to appeal to a younger workforce. According to a report by Colliers, 80% of the large, 40+ desk coworking deals are coming from multinational corporations.

In 2016, Microsoft moved 300 of its New York City employees into a WeWork and announced that employees in cities like Atlanta, Portland and Philadelphia would also have the option of working from the coworking hub.

Since then, other major players like Starbucks, HSBC, Bank of America and PwC have opened up their traditional workplaces to coworking.

Why businesses are partnering with coworking spaces

The ways we approach work and life are evolving quickly, so it’s no surprise major corporations are looking to shake things up by embracing the coworking trend. Businesses that open up their workspace to coworking are ones that want to:

Harness the entrepreneurial spirit. Companies like Microsoft, Bank of America, and even Facebook realize that in order to remain relevant and compete with emerging brands, they need to tap into the innovation that got them to where they are now. Entrepreneurial minds flourish in the flexible, open and collaborative environments fostered by coworking spaces like WeWork. These corporations want to align themselves with the folks making new things happen.

Appeal to millennials. The debate over how to attract, hire, and manage millennials has been raging on for years now. And while many businesses are still trying to figure out all the details, those that set up shop in the central, well-designed, multi-purpose spaces provided by coworking can almost assure a head up on the competition for young talent. Millennials are more likely to practice work-life blending, as opposed to completely separating the two. It’s not uncommon to see a millennial worker take a break from work around 4pm to grab a beer with a contact, only to head back to their desk at 6pm to finish up work for the day. These interactions can happen all under one roof in a coworking space, making them ideal for those elusive millennial rockstars.

Cost savings. It’s no secret that multinational corporations like PwC can afford to throw cash around on experiments like coworking, but appealing to the millennial workforce isn’t the only benefit they stand to gain. The flexibility afforded by coworking can yield up to 25% cost savings for businesses. And if they should decide to go back to the old way of officing, they won’t have to worry about getting saddled with penalties or dealing with assignments or subtenants.

What this could mean for the future

Flexibility will soon trump stability. Large corporations see coworking as a safe way to prove out innovation experiments without committing to long-term leases or exorbitant buildout costs. Expect tenants to be on the hunt for flexible solutions.

Central location is key. Coworking spaces are known for being located in the hippest, most walkable neighborhoods. Businesses know employees crave accessibility to their favorite coffee shops, fitness centers, parks, bars and restaurants. In order to compete with trendy startups and encourage employees to forgo working from home, businesses will want to place their headquarters in the hottest neighborhoods, not fringe CBD’s.

Back in the early days of coworking, many futurists lauded the phenomenon as a flash in the pan trend that would soon give way to the traditional office space. Those people were wrong. Not only has coworking continued as the most preferred solution for startups, it has caught on with large, multinational corporations as well. The benefits of working in a communal environment can be shared by workers young and old, so expect coworking-style elements to infiltrate an office near you soon.