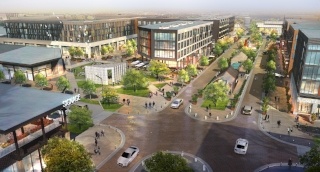 We’re on to the third story series about brokers’ longest and shortest deals ever. So far, we’ve shared lessons learned from a two-year multifamily deal in Chicago and an assisted living deal that wrapped up with a mere four minutes to spare. Today, we’re sharing the story of a redevelopment deal that many developers had tried to win but failed—until one team finally made it happen.

A redevelopment deal years in the making

“The longest deal we worked on was for the Shipwatch Development,” says Burt Rhodes, senior advisor and partner at SVN | GASC Commercial.

The city owned the 18-acre North Charleston site and had stipulated that whoever developed it would have to bring a grocery store to the area. Rhodes and his team successfully closed the deal in November, after two years spent working with the city to purchase the site.

“During that process, there were many meetings with the mayor, his staff, and government officials,” Rhodes says. “There was a full presentation about what we planned to do with the site, presented with the design, brokerage, and equity teams to prove that we were capable of pulling it off.”

The biggest challenge they—and the developers who had come before them—had faced was the city’s requirement to find a grocery store. Then, there was the process of getting the right things approved by the right people.

“The city is very pro-growth and was very willing to work with us,” Rhodes says, “but the city council only meets once a month.” Each time his team had a new opportunity, they had to present it to the mayor, the staff, and the city council for a vote.

“Even though the city is very pro-growth and is not trying to slow development, there are still processes you have to go through,” Rhodes explains.

Many developers had tried to make this deal work in the past, but all had failed to attract a grocery store. By the time Rhodes and his team looked into the deal, it had been under city ownership for eight years.

“We got a regional grocery store and started moving forward but didn’t get the interest level we wanted,” Rhodes says. “Nobody wanted to be the first to jump in because it’s a re-development area.”

“However, we were able to secure a restaurant depot that met the qualifications of the grocery store, and used that to close on the purchase of the site,” Rhodes says. “Within five months, we had a grand opening for a totally climate-controlled restaurant depot, which is now fully operational.”

“We also gave two acres back to the city for future development of a traditional retail grocery store, which we are still recruiting for,” Rhodes says. “We have approximately ten acres left to develop, and we are co-brokering and still soliciting offers for that.”

The site is being planned for ground floor retail with office and multifamily space above. It will incorporate some of the area’s public transportation and include 350,000 square feet of six to eight-story buildings.

This deal may have been longer than most, but it holds special meaning for Rhodes. “I grew up in this area,” he says. “In the 50s, this lot used to be the largest shopping center in the state. There was a department store here, and my grandmother was the manager of the boys’ department in that store. I also had a paper route there as a kid, so was very passionate about getting the deal done and seeing the community serviced properly with a grocery store.”

A final word on long deals

As you can tell from these stories, there are countless reasons deals run long. Sometimes it’s a battle of egos that holds things up, and sometimes it’s simply the back and forth it takes to push things through.

Much of that may be out of your hands, but there are still things you can do to speed things along where you can. Derek Hermsen, founder and designated broker at Union Street Corporate Real Estate, LLC, shares some insights:

“Longest deal? They all feel like eternity because experienced brokers know that ‘time kills all deals,’” Hermsen says. “You have to play hot potato with what you can influence.”

“As a broker, you can influence deal flow by sending your feedback to clients on proposals immediately, and by suggesting the next move. You can conduct quick financial analyses to give your clients perspective on deal points and help them make a decision more quickly. You can make tours happen.”

“Ultimately,” he says, “you need to read how your client performs its decision making and adapt to it. If they are constantly unavailable and busy, you need to really get to the point for them. You start with what you think is the number one option, and then work your way down the line.”

“On the flip side, some clients like to see things from the 10,000-foot level and want more information and give you greater attention,” he says. “To keep these moving, provide all the detail they want, but always suggest the next move so that they don’t get lost in the information.  Either way, find a way to help them make their decisions.”

Apto makes it easy to track, manage and work your deals from start to finish. A simple interface and intuitive workflow help you drive every deal forward, and sales tools help you turn your data into action so that no deal or detail falls through the cracks.